When I was first called to preach, I would often feel a tug on my heart to go witness to the hippies who at one time prowled the street of Huntsville into the late hours of the night. There was a part of me that really felt, impressed to do it. But there was a part of me that wanted no part of it. When I would decide to go downtown, I would find a freedom. But my freedom was always in direct proportion to the extent of my cooperation, my willingness to follow.

When I would arrive at my destination, I would often sit in the car for half an hour struggling with fear. A part of me wanted to take the next step. A part of me wanted to stay inside where it was safe. Then I would commit to get out and just walk around the block. Many nights I would pray, “God, I will walk around the block and if I don’t see anyone, I’m going home.” Just yielding to that part of the influence, would give me the freedom to take the next step.

So many nights, I would yield one degree, one step, one decision at a time only to experience a growing freedom and power for each new step. With each decision to follow, I would experience a new level of freedom. So many nights started that way and ended with me winning dozens of people to Jesus and loving it!

Every time I hear a message on how to pray I get more confused.

Medicine for the Heart (part 2) 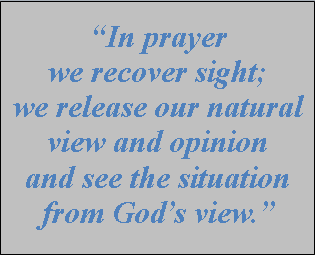 If Jesus has already given us all we need, what do I pray about?